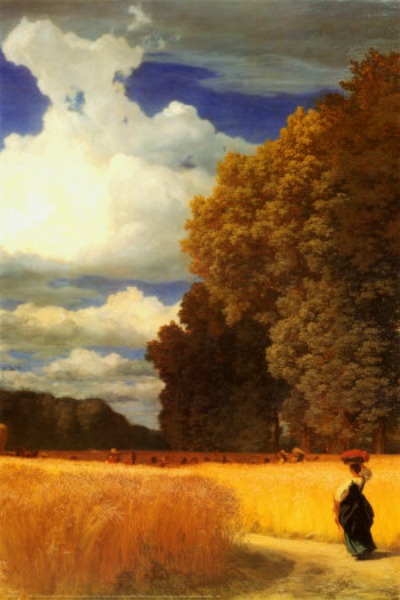 Sometimes when I’m really stressed out, I fantasize about running away. During one of those periods, I found myself staring at an 18th century painting in my living room by Robert Zund called “The Harvest”.  At periods when I’m going through a very difficult situation, I sometimes close my eyes, wishing I could go be transported to another place and time. The thoughts were actually therapeutic as I was intensely wishing that I could be in that picture on the wall, when life was simple.

I can’t explain it, but I somehow convinced myself, that if I ran towards the picture and jumped into the frame, I could vanish into the painting. So I went to the far end of my living room. I then bolted at my top speed and jumped toward the frame. To my amazement, I landed in the field. I was a little disoriented initially, but it quickly went away. It was so serene and peaceful. I picked myself up and dusted myself off while feeling a gentle soothing breeze. I felt totally at peace.

I saw a woman walking down the road, so I approached her, anxious to know about my new surroundings. After I finally caught up to her, I looked at her as I smiled, and I said, “Hi”.

She slowly turned her head towards me and said, “Run away slave! Somebody help me catch him!”

I turned around and ran as fast as I could. I jumped out of the picture frame, and landed on a table in my living room, breaking my ankle. Even though I was in excruciating pain, at least I wasn’t forced to pick cotton.