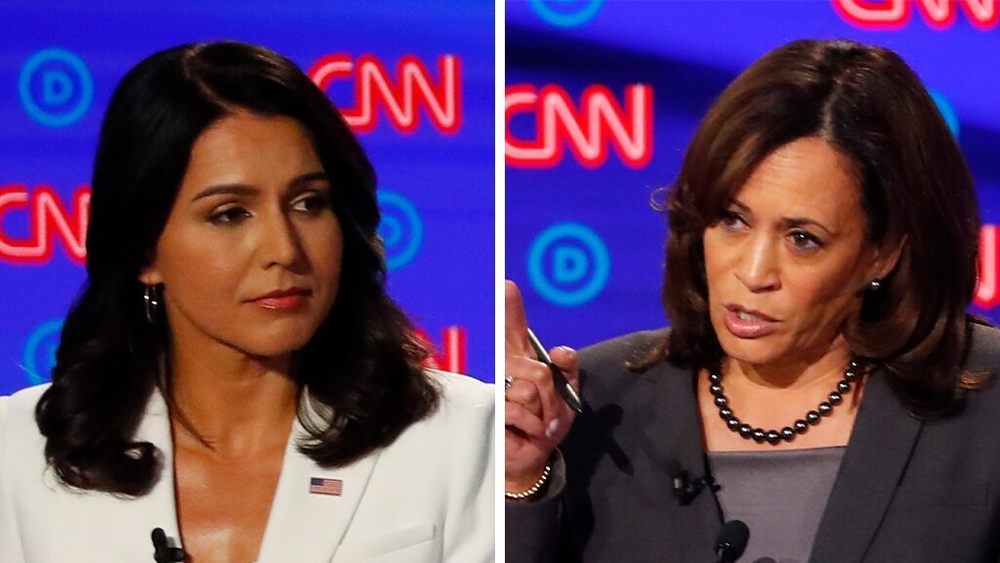 BREAKING NEWS – Detroit Michigan – Sen. Kamala Harris responds to 2020 opponent Rep. Tulsi Gabbard, after the lawmaker from Hawaii slammed the Californian’s record as a prosecutor on the presidential debate stage.

“Sen. Harris says she’s proud of her record as a prosecutor and that she’ll be a prosecutor president, but I’m deeply concerned about this record,” Gabbard said. “There are too many examples to cite but she put over 1,500 people in jail for marijuana violations and then laughed about it when she was asked if she ever smoked marijuana.” She also blasted Harris for maintaining the cash bail system which, she argued, disproportionately hurt poor people. Gabbard accused Harris of keeping prisoners beyond their sentence in order to use them as “cheap labor” as well as blocking evidence that would have “freed an innocent man from death row.”

“I can explain all of my decisions,” began Harris after the debate. “As far as me smoking marijuana, I did it to alleviate the stress of my having to lock people up for smoking marijuana. Had I not done it, I would’ve became emotionally unstable and made poor decisions. As far as the cash bail system, I was compelled to get more money for California, so I would feel more comfortable when I sought a pay raise. It’s true that I kept prisoners beyond their sentence in order to use them as cheap labor. But I do regret encouraging the guards to use a whip on the inmates when they worked outside, and demanding that prisoners sing Negro spirituals. And lastly, as far as me blocking evidence that would have freed an innocent man from death row. That matter could’ve been resolved quickly, but the innocent man and his attorney refused to sign an agreement, that prohibited them from publicly talking about the ethical violations I committed on this particular case. And even if he was executed, no one lives forever, and that’s a scientific fact.”