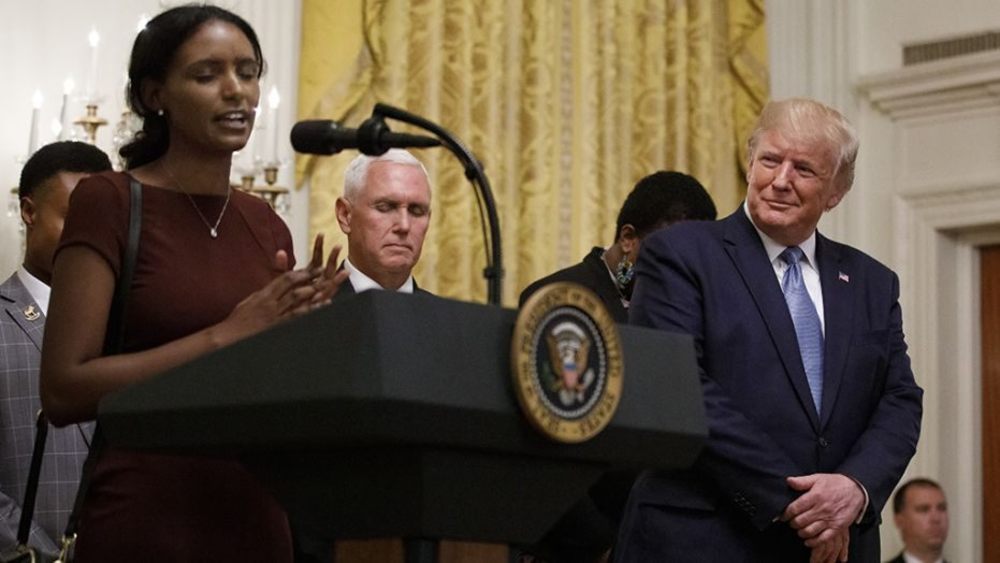 BREAKING NEWS – Washington, D.C. – After President Trump finished his speech to the Young Black Leadership Summit at the White House, a young woman in attendance yelled something that stopped the president in his tracks.

“Let me pray for you,” Mahalet, an Ethiopian immigrant adopted by a Christian family in Indiana, said. Trump stopped the music and brought her up on stage to the presidential podium, according to Justin Wilson, who attended the Turning Point USA event.

“Dear God, I’m not really good at this,” Mahalet said, laughing. “But I just want to say thank you so much for giving us this opportunity to be in the White House. Thank you for giving us a great leader like Trump, Mr. Donald Trump, and I would like to thank you for waking up our nation.”

Civil rights activist Al Sharpton was outraged at the gesture. “There is no excuse for her behavior,” Sharpton began. “God does not listen to any prayers about Trump. He never has and he never will. Besides, what does an Ethiopian know about God? I’ve know God for decades, and I have a the title ‘Reverend’ in front of my name to prove it! He has taught me how to motivate people, while making a ton of money and dodging paying taxes. Mahalet should refrain from public prayers until she has learned enough about America and studied my modified version of the bible!”