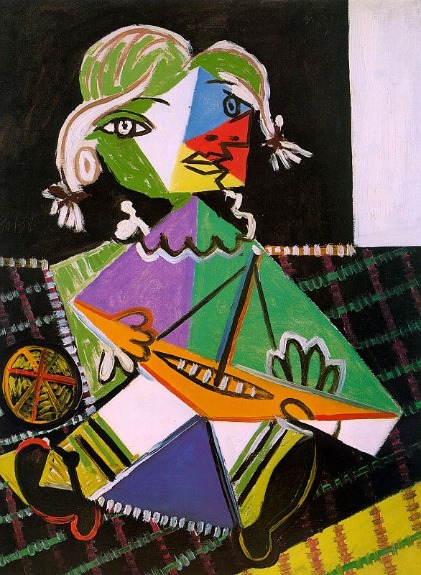 BREAKING NEWS – New York City, New York – Shockwaves are still being felt worldwide after the recent discovery by the Metropolitan Museum of Art regarding Pablo Picasso. The painting that was attributed to him called “Girl with a Boat” was not his work at all, but likely something his daughter drew when she was in either kindergarten or the first grade.

Art dealers and historians say that they are confident, their conclusions are correct. They say that they base their opinions on two facts that are not in dispute.  The first one is, some writings on the back of the “amateurish painting” reflected that a grammar school teacher gave the student a “B” for not coloring outside the lines of a picture that they drew. And the second fact is, some fingerprints on the back of the picture are that of a small child, that were stained with peanut butter and jelly. Further evidence that suggests it was done by his daughter when she was a little girl (according to the art dealers and historians)  is a photo taken of Picasso in his kitchen standing near the drawing, and it was taped on his refrigerator next to a report card and a grocery list.