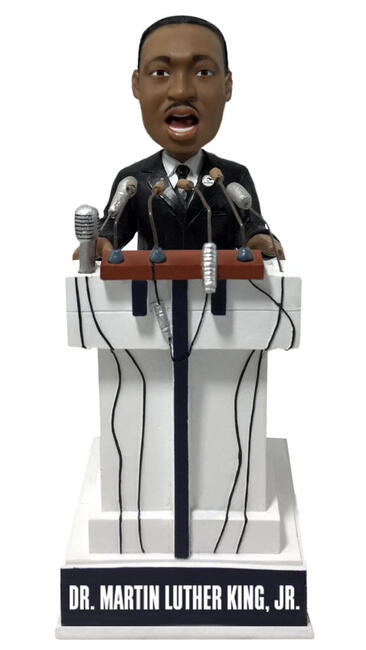 The miniaturized MLK features King standing at a podium as he presents his iconic “I Have a Dream” speech that he originally delivered in 1963 at the Lincoln Memorial in Washington, D.C.

“”We are proud to release the first talking bobblehead of Dr. Martin Luther King, Jr. as we commemorate his life and legacy on MLK Day,” said Phil Sklar, CEO and co-founder of the National Bobblehead Hall of Fame and Museum. “Dr. King is one of the most frequently requested when it comes to bobbleheads, and we’re thrilled to team up with his estate to provide people with the opportunity to honor and celebrate his life with this bobblehead. We plan on creating a talking bobblehead for Vice President Kamala Harris, which is easy because her head frequently bobbles at the end or toward the end of every sentence she speaks. And fortunately for us, she gives a long list of moronic things the toy can say, which will obviously be some of her exact quotes.”